What is a Swarm?

Have you ever seen a cartoon or show where a large cloud of bees chase someone, flying over their head and stinging them everywhere? That's a swarm, right? Thankfully, a real swarm is much more gentle and an interesting phenomenon!

In a normal hive taken care of by a beekeeper, a honeybee hive is made out of wood, and can be stacked to add more room for bees. One hive of bees has between 60,000 to 80,000 bees, with the majority of that number being workers. Sometimes, the honeybees may feel overcrowded in their home. After all, it is a large population for such a small home. If the hive isn't getting enough honey supers added for the bees to store their honey in, they prepare to fly away and make a new home somewhere else in the wild. Half of the bees will search for a perfect spot to create their new home, while others will stay at their current home and continue to live there.

In preparation for the swarm, the queen of the hive has to stop laying eggs about two weeks before they leave. She is too heavy to fly herself outside of the hive, so when she discontinues laying eggs, her body will shrink a little smaller, so she can carry her own weight and fly with the swarm. Before she stops laying eggs, she has to prepare new queen cups for the old half of the hive. She will then lay eggs in the queen cells, and the workers will feed them their royal jelly. Once the old queen and the half of the hive leaves or "swarms," the new queens will be born, and they will have to fight to the death for a new queen to take over.

When the swarm of bees look for a new area for their home, they like to find places high and away from living things, or in small and dark spaces, where they feel safe. During a swarm, honeybees are very docile. This is because they do not have anything to protect yet. They need to have the queen lay more eggs, and they need to start building their new home so they can store honey and pollen again. Sometimes bees will swarm in places that humans aren't very fond of, so they will call a beekeepers to safely remove the swarm, and rehome them back into a wooden hive.

If you ever happen to see a swarm, it's best to stay a safe distance away, call an experienced beekeeper, and let them do the rest! 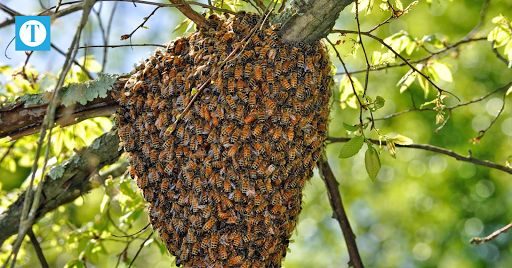