The Honeybee’s Life in the Hive

Have you ever wondered how the thousands of honeybees in a hive understand each other and know what to do during their lifetime? Each honeybee has a specific job, and they all know exactly what to do. There are three types of bees in a hive: the queen, the drone, and the worker bee. There are about 40,000 to 80,000 worker bees in the hive, about 1,000 drones and one queen. Let’s focus on the worker bee and what she does in the hive.

The worker bee is the smallest bee in the hive, and they are females. She is the one that you see outside, pollinating flowers as she collects nectar and pollen. The worker bee also does all of the work inside the hive. She begins with cleaning out the cell she emerged from, and then moves around the hive cleaning up any debris, extra wax, leaves, dead bees, etc. They are very clean insects!

After this, the worker bee becomes a nurse bee by feeding the larva “bee bread,” which is pollen and nectar mixed together. Then, she becomes a part of the queen’s court and helps take care of the queen bee. The queen is busy laying up to 2,000 eggs a day with no rest, so the worker bee feeds her and grooms her. Next, she will move out to the entrance of the hive box where she becomes a guard bee. In the event that something creates danger for the hive, she will let off a scent that is called the alarm pheromone and alert the other bees of the danger.

In the summer time, it can get very hot with the sun shining on the hive all day. Honeybees keep their hive around 94° to help the larva and pupa grow strong and healthy. They stand in the front of the hive and fan their wings to make the air in the hive circulate and cool down the interior. During winter months, they will vibrate their bodies to warm the hive.

Worker bees have eight wax glands on their abdomen. After eating honey, they can draw the wax out of their wax glands in little flakes. They gather the wax with their mandibles and mix saliva into it to make it more pliable. They use wax to form cells for storage of eggs, pollen, nectar, and honey. 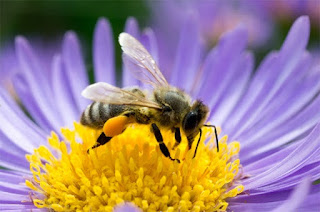 The last job that the worker bee has is foraging. She communicates with her sisters using a bee dance. She vibrates and moves around in little circles which tell the other bees where the flowers are located. Bees forage for four things: water, propolis, nectar, and pollen on flowers. Honeybees have two stomachs—one for eating and one to put the nectar into called a honey sac.  While the nectar is in the honey sac, she will add three types of enzymes into the nectar. These enzymes are what causes honey to never spoil. She then puts the nectar into a cell where she uses her wings to dehydrate it and thicken it into honey. Then, she caps over the cell full of honey with wax to keep it clean. Honeybees store plenty of honey for their food throughout the year, as well as plenty to share with humans.

I am very grateful for honeybees. They teach us many things about life.  Watching them do all of the many different jobs both inside and outside the hive is amazing. They know how to keep the hive running smoothly, they cooperate and communicate and work very hard. Each bee is needed, or the colony would not survive. Honeybees are amazing insects!
Posted by Lucy Winn at 12:00 AM No comments: