The new American Honey Queen and Princess were selected at the 80th Anniversary American Beekeeping Federation Convention in Jacksonville, Florida. 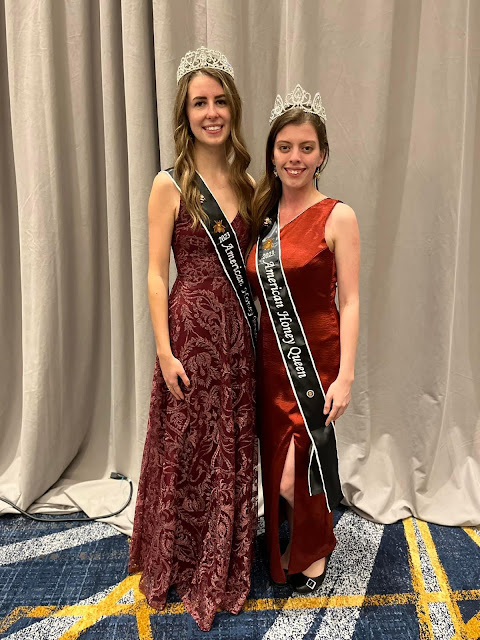 Congratulations ladies! They will travel the United States promoting honey and beekeeping and post interesting articles about bees and honey along the way. Keep an eye out for the sweetest representatives in America!
Posted by Selena Rampolla & Allison Hager at 8:21 AM No comments:

My favorite way to remember the basic anatomy of a honey bee is to count to six!

A honey bee has one proboscis! The proboscis is the tongue of the honey bee. It is shaped like a straw, and specialized to allow easy access to the center of a flower to collect nectar. A honey bee will use their tongue in two ways. One of the ways is like a straw. The other is with a lapping motion, like how a dog drinks water.

You will find two antennae on top of a honey bee's head. A honey bee will use their antennae for data collection. This includes touch, taste, and smell. Honey bees have some of the most complex pheromone systems in the world. Pheromones are chemicals bees excrete that are used to communicate with other bees. These antennae allow the honey bee to smell the pheromones and act accordingly. Did you know? a honey bee has four muscles that are used to control antenna movement.

3. Segments of the Body

The head, thorax, and abdomen are the three segments of the body that make up a honey bee. The head is used for sensory input. The eyes, proboscis, and antennae are all located on the head of a honey bee.

The thorax anchors the wings and the legs of a honey bee. The muscles found on the thorax allow the honey bee to rapidly move their wings.

The abdomen of a honey bee is where they digest their food, as well as store nectar during flight. Wax glands, where honey bees excrete flecks of beeswax, are located on the underside of the abdomen. For a worker bee and a queen, the end of the abdomen is where you can find a stinger. A queen bee's abdomen is much longer than a worker or drone's.

A honey bee has two pairs of wings. These four wings are incredibly fast. A honey bee can beat their wings 230 times per second. These wings allow the bees to fly three miles away from their hive at up to 13 miles per hour.  A hive of bees will fly 40, 000 miles to collect enough nectar to produce a pound of honey.

Honey bees have six legs. The front legs have hooks on them, specially designed to help the honey bee clean antennae, so that they can smell, hear, and see better. The hind legs have an incredible body part called a corbicula, also known as a pollen basket. The pollen basket has a dip in the leg, surrounded by a ring course hairs that allow the bee to pack pollen. The bee can hold a lot of pollen during flight, making it easier to bring back to the hive for food.

Posted by Selena Rampolla & Allison Hager at 3:09 AM No comments:

Has a loved one ever made you a hot cup of tea with honey when you were sick? That drink was doing much more for you than being a comfort. Honey has many health benefits, and has been used for medicine since the time of Ancient Egyptians.

Honey is also a humectant, which means that is preserves moisture. Many people put honey on burns to help heal the skin faster.

A good rule of thumb when looking to honey for its medicinal uses is the darker the honey, the better it is to use for medicine. Darker honey typically contains less water and more nutrients such as antioxidants. Some varieties of dark honey include: buckwheat, chestnut, and dandelion. Ask your local beekeeper about darker varieties, and consider honey as your health aid next time you are sick!

Posted by Selena Rampolla & Allison Hager at 2:57 AM No comments:

Personally, my favorite part about beekeeping is watching the bees interact with each other in the hive.
From building comb, feeding brood, protecting the hive, and making food, a bee hive operates like a well oiled and very efficient machine. This cannot occur without proper communication.
Honey bees have two main ways of communicating to the other bees in the hive.
The Waggle Dance is the way bees tell their fellow foragers about food sources nearby. The worker bee will walk in a straight line angled in the same way the food source is in relation to the sun.  The distance of the nectar source is communicated by how long the worker walks in that line. The excitedness of the dance is related to how plentiful the food source is. The full dance makes a figure eight.
Honey bees also communicate through pheromones. Pheromones are natural chemicals that are excreted to evoke a response within the same species. Honey bees have one of the most complex pheromone systems in nature. Honey bees use pheromone communication in every aspect of their life.  For example. the alarm pheromone is used to tell guardian bees that the hive is being threatened, and needs to be protected. It is said that the alarm pheromone smells like bananas.

Could you imagine communicating solely through movement and scent? Honey bee communication is just one of the few things that make the insect absolutely amazing.
Posted by Selena Rampolla & Allison Hager at 9:32 AM No comments:

It is a well known fact that honey bees make honey. Did you know that there are other commodities produced by the very useful honey bee that can be utilized in many different ways? The goods produced by honey bees that people can use are called products of the hive. Let's look at another product of the hive, beeswax, and what people do with it.

A worker bee produces beeswax from her wax glands, located on the underside of her abdomen, the third segment of the body. The bee will then chew the wax, to make it moldable, and form it in the hexagons seen on a honeycomb.

Did you know that a hive of bees has to eat eight pounds of honey to have enough energy to produce one pound of beeswax?

People use beeswax in many different ways, from candles to furniture polish. Beeswax is also a common ingredient found in beauty products, such as lip balm or soap. Beeswax is used along with rosin to treat string instruments to be able to play.

Encaustic painting is the art form in which artists use colored beeswax on canvas or board to create beautiful works of art.

Some people use beeswax as a chewing gum, others coat cloth with the wax and make a sustainable plastic wrap alternative.

How do you use beeswax? Below is a link by Good Housekeeping to make your own beeswax wraps.

Consider this for an eco-friendly and cost saving substitute for plastic wrap!

Posted by Selena Rampolla & Allison Hager at 2:56 AM No comments:

Background of the Bee Suit

A fundamental piece in a beekeeper's toolkit is the bee suit. The classic all-white jumpsuit with mesh veil is the first thing someone thinks of when the word beekeeper is mentioned. The bee suit has been optimally fitted for beekeeping. Let's take a look at some of the different elements of the bee suit and the purpose of the design.

Bee suits are light in color, most commonly seen in white. Predators of the hive such as bears, raccoons, and skunks all have dark fur. Because of this, darker colors alarm bees more than very light colors do.  Bee suits can be made in a thick canvas material. The canvas suit is effective in keeping bees out and preventing stings, but can get extremely hot. Spending hours a day working in hives during the spring and summer months can be a very physically taxing job. Now, the popularity of mesh suits has risen. These new suits have layered mesh, which allow airflow while also protecting the beekeeper from a potential sting.

Another facet of the bee suit are gloves, in order to avoid stinging in the hand. A beekeeper's gloves are typically made out of goat leather. Goat leather is not as inpenetrable as leather from cows, but it is softer and thinner, giving the beekeeper more ability to move. Beekeeping can be incredibly delicate work, so free range of motion is important. Bee suits are specially designed for being in beehives and around honeybees. They are useful for any beekeeper!
Posted by Selena Rampolla & Allison Hager at 5:00 AM No comments:

Across the United States, from California to Maine, honey is produced. There are more than 300 different varieties of honey that can be found in America. Honey comes in many different colors and flavors. The type and taste of honey is determined by the nectar source that honeybees find in different flowers. As a guideline, the darker the honey, the more intense the flavor. Lighter honeys typically have a more floral and sweet taste to them.
Buckwheat honey is a darker variety of honey, known for its powerful and potent taste. It is produced by honeybees from a buckwheat plant. It can be found in the northern half of the United States.
Avocado honey is produced predominately in California. Avocado honey has a smooth yet bold flavor, similar in color, thickness and flavor to molasses.
Orange blossom honey is made by honeybees mainly in Florida. Something that is unique about orange blossom honey is that it has a slight orange flavor to it. This is completely natural, as the flavor of orange is not artificially added. Most honeys that come from fruit producing flowers do not have the taste of that fruit, but orange blossom honey is unique. This honey is light amber in color.
It is important to support the American honey industry. Honeybees have a vital role in agriculture, and the best thing a person can do to help the honeybees is to support the people who take care of them, the beekeepers!
Posted by Selena Rampolla & Allison Hager at 5:00 AM No comments: