The Sting of a Honeybee


If you ever get stung by a honeybee, the first reaction will be to pull the stinger out of your skin, but 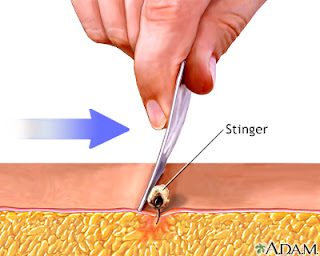 don't pull it out! When the honeybee flew away, she left that stinger in your skin along with the venom sack. If you pull the stinger out, you will push more venom into your skin, causing a bigger swelling reaction. The best thing to do if you are stung by a honeybee is to use your fingernail and gently scrape the stinger out of your skin. A natural swelling reaction will occur with a honeybee sting so don't worry about swelling. The cause for concern will come if after a sting, you have trouble breathing or swelling of the airway. In a case like that, medical attention is necessary! As for a normal sting with some swelling, the swelling will go down in a couple of days. If you would like the swelling to be lessened, one thing you can do is to take baking soda and mix it with a little water, creating a toothpaste consistency. Put this on the area affected and the baking soda will help draw the venom out, lessening the swelling reaction.

When a beekeeper goes to the hive, they may use some equipment that will help to minimize the amount of stings they receive. One piece of equipment a beekeeper will use is a bee-suit. The bee-suit will cover the beekeeper from head to toe and prevent the honeybees from from having direct contact with a beekeeper's skin. Another piece of equipment the beekeeper will use is a smoker. A smoker is basically a tin can the beekeeper will build a campfire in and then use to smoke the bees. The smoker doesn't hurt the bees at all but instead calms them down by masking their form of communication. Honeybees communicate through smells. When they get alarmed, they release the alarm pheromone that smells like bananas. This is signalling to all the other bees that there is something attacking the hive and they need to fight. This is where the smoker comes into play. The smoke will mask those pheromones and help the bees to remain calm while the beekeeper checks on them.