Did you know that honeybees can see flowers so small they are barely visible to you and me? Do you wonder how they can see tiny little flowers while flying so quickly? Honeybees are truly amazing insects, so let us learn how honeybees see.

Honeybees have incredible eyes. In fact, they have five different eyes with different jobs. Three small eyes on top of their heads control how much light enters. The other two eyes are used to see an image of their surroundings.


Not only do honeybees differ from humans by having five eyes, but also they are able to see different colors people are unable to see. Honeybees see in ultraviolet light. Ultraviolet light allows bees to see more blues and purple, whereas people see more reds and yellows. Almost every flower has ultraviolet light in it. The ultraviolet color pattern on the flower acts as a runway that leads the honeybees to the nectar. Honeybees prefer flowers that are open and with fewer petals so that they easily land on the flower to drink nectar and collect pollen. 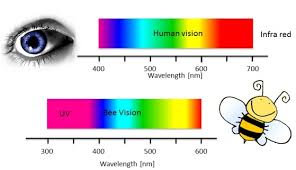 So, how do the honeybees spot the tiny little flowers while flying? They have five eyes that help them see better and they see ultraviolet light that helps them see even the smallest of flowers. Honeybees need lots of flowers to pollenate, so if you love flowers too, help the bees by planting flowers or taking care of the flowers near you.
Posted by Jennifer Hinkel & Virginia Allen at 7:00 AM No comments: 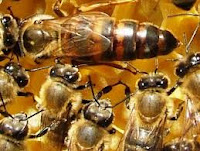 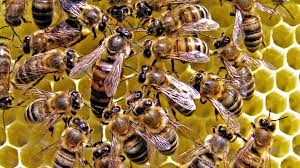 
Posted by Jennifer Hinkel & Virginia Allen at 12:00 AM No comments:

There are more than 300 varieties of honey in the United States, and there are more than 1,000 different varieties of honey worldwide. Honey is unique, in that it never spoils because of special enzymes that the honeybee places into the nectar as it is in her honey sack. A lot of people confuse crystallization with honey going bad. When this occurs, all you have to do is place your jar underneath warm water, and it will soon turn back into liquid honey.

Sometimes when honey crystalizes beekeepers like to whip it, creating a smooth, thick, and all around delicious creamed honey. Another way people enjoy buying honey is with slices of comb inside the jar. This helps them know that it is pure and straight out of the honey comb. Sometimes beekeepers will cut their comb into squares and sell individual squares of honey comb. The varieties are many, and your preference of consuming honey is completely up to you. We recommend trying all the different varieties to find your absolute favorite.

Ranging from almond honey in California to orange honey in Florida, the source of nectar will determine the coloration and taste of the honey. For example, buckwheat flowers produce a dark colored nectar that the bees make into honey, people like to cook with darker honey because it has a richer flavor. On the other hand, the fireweed flower produces a very light colored nectar. The lighter color usually results in a sweeter taste.
Posted by Jennifer Hinkel & Virginia Allen at 10:00 AM No comments: