As with any other activity, there are special tools used when beekeeping. Many of the most common beekeeping tools are used for protection against honeybee stings. Honeybees are protective, not aggressive. They will only sting if they feel they must to protect their hive and their queen. However, when a beekeeper opens up a hive to work inside, the bees might think the beekeeper is trying to hurt them and respond aggressively. With the proper tools, beekeepers can work with bees with a minimal risk of being stung. 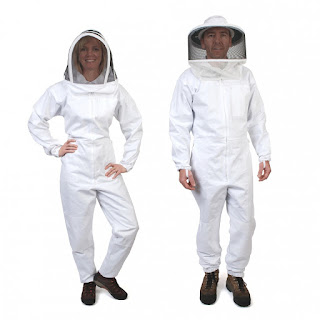 The first tool of beekeeping is proper clothing. Some beekeepers choose to wear a full bee suit that covers their entire body. This suit is made of a thick material the bees cannot sting through. The beekeepers might also choose to wear gloves so none of their skin is showing. The suits are often made of white material because bees are less aggressive towards lighter colors. The reason for this is thought to be that honeybees’ natural predators are often dark in color. Imagine a beekeeper in a black or brown bee suit. The bees might think a bear is coming to destroy their hive and become very upset. On the other hand, very few animals that harm honeybees are light in color, so the bees are not as concerned if a beekeeper in white works with the hive. Bee suits are a great tool because they fully cover the beekeeper. However, bee suits can be very hot to work in and/or restrict movement, which is why some beekeepers choose to only wear a veil instead. A veil is a special hat with netting around the face. The netting keeps the bees from being able to sting the beekeepers face. Honeybees are very busy on warm summer days, so often a veil is all that is needed for protection. 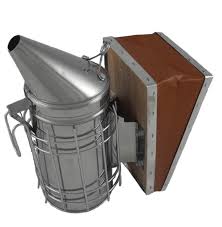 Another tool used by beekeepers is the smoker, which, as suggested by its name, is used to create smoke. The first purpose of the smoker is connected to honeybee pheromones. Pheromones are scents honeybees use to communicate with one another. One scent, called the alarm pheromone, is used by worker bees to tell other workers bees something is wrong and they need to defend the hive. The bees might choose to use this scent when they see the beekeeper open the hive. As more and more bees smell the alarm pheromone, they are more likely to defend the hive against the beekeeper. However, the smell of smoke made by the smoker is stronger than the smell of the alarm pheromone. If the beekeeper uses the smoker on the hive, they bees won’t be able to smell the alarm pheromone, and they will stay calm. The second purpose of the smoker is to make the bees think their hive is on fire. Researchers think when the bees smell the smoke they believe the hive is on fire and they will have to leave the hive. However, they don’t want to leave empty handed, so they fill their honey stomachs up with as much honey as they can hold. However, having full honey stomachs keeps them from being able to sting, so the beekeeper is safe. Once the beekeeper finishes working in the hive and stops using the smoke, the bees realize there isn’t a fire and put all the honey back in the cells. The smoker is very effective and does not harm the bees in any way. 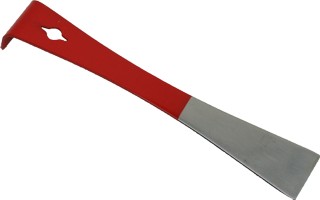 One tool used that isn’t connected to the safety of the beekeeper is the hive tool. Hives tools are used for a variety of purposes. First, honeybees have a tendency to seal everything in the hive using wax and propolis. Hive tools can be used to scrap the wax away to tidy up the hive. Second, honeybee hives are full of frames, which are used to store honey. Beekeepers can use the hive tool as a level to pull out individual frames when needed. Third, hive tools can be used as a hammer on loose nails or staples in the hive. Creative beekeepers will use their hive tools for any number of tasks throughout the day including scraping paint off a wall or cutting open a taped up box. There is no limit to the uses of hive tools.

Successful beekeeping is possible without any of these special tools, but they certainly make the job easier. Imagine a house-painter working without a ladder or a carpenter without a hammer. These workers would still be able to do their jobs, but it would be much more difficult. In the same way, beekeepers’ jobs are made easier with bee suits, veils, smokers, and hive tools.