Queen of the Hive 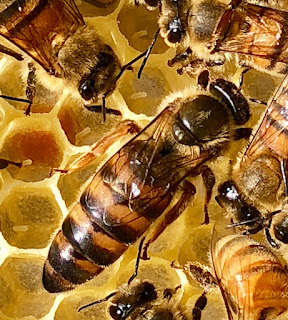 The Beginning
Let's start at the very beginning to how a queen is created. When a hive is queen-less or the queen is beginning to fail in her ability to lay eggs, the worker bees will start the process to create the next queen for the hive. In order to create the queen, the worker bees will create queen cups which are large cells where the queen will start to develop. In these queen cups, workers will place a single female egg in each of these cells which are now destined to become a queen. While the larvae begins to develop, worker bees will feed her royal jelly until the cell is capped over at day 9. On day 16, the queen will chew her way out of her cell with the help of worker bees. There can only be one queen bee in the hive so the first queen to emerge from her cell will kill the other developing queens or if multiple queens emerge at the same time, they will fight to the death with the strongest queen surviving. 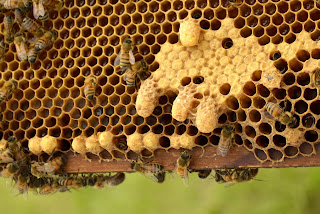 Queen cups have been created to start drawing out (creating) a new queen.
The Largest Bee
Each of the three bees found within the hive are a different size which correlates to the job that those bees have within the hive. The queen bee is the largest bee in the hive because of her responsibility to lay eggs. It was because of her diet of only royal jelly while she was developing in her cell which played an important role in allowing her to become the largest bee. Her body can be up to 20 mm long and she will have a large area on her thorax which will be free of hair making it easier for a beekeeper to identify the queen. Because her body is so long, her wings are only about half of the length of her body as she rarely has the need to leave the hive and use her wings. Another aspect that makes the queen unique is her stinger. Her stinger does not have a barb on it meaning that she is able to sting multiple times but she also uses the stinger to help position the eggs she lays in each of the cells. The next largest bee is the drone bee (male). The role of the drone bee is simple as they have one sole purpose which is to mate with a queen. The bees that do the majority of the work in the hive are the worker bees (female). A hive can be comprised of up to 50,000 worker bees each with different roles to support the hive. The different jobs that a worker bee has changes as she becomes older so in her short 5-6 week lifespan, she may do up to 8 different jobs! 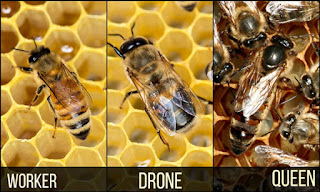 The size of the bee plays an important role in the job they will have during their life.
The Role of the Queen
The queen has an important job for the rest of her 1-2 year lifespan which will focus around producing eggs and keeping the hive strong with worker and drone bees. Shortly after the queen emerges from her cell she will leave the hive in order to complete her mating flight. After returning to the hive, she will lay up to 1,000 eggs every day of her life. She is the only bee within the hive that is able to reproduce and determine the gender of each egg that she lays. The majority of the eggs that she will lay are female with the purpose of becoming worker bees. 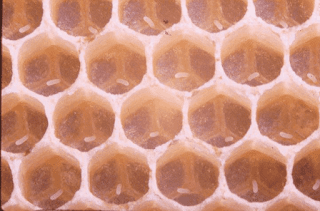 One egg is layed in each cell by the queen.
Caring for the Queen
Since the queen has the sole responsibility of laying eggs, she has servants to care for her. These servants are called the queens court as seen in the picture below. The queens court will surround the queen in order to take care of all of her needs. These worker bees will not only feed the queen but they will also keep her clean each day of her life. 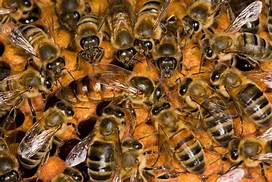 The queens court surrounds the queen to care for her.

While there is only one queen bee in the hive, she has a very important role everyday of her life. The success of the hive is dependent on her ability to lay eggs that will grow up and have important roles within the hive. No wonder she is called the queen because she is so important!

Posted by Selena Rampolla & Allison Hager at 5:00 AM